Me and Russia, we go way back

[Written in response to, “How come you old farts are so pissed off about Russia?” asked by a younger friend whose political awareness bloomed after the Cold War.]

My stormy relationship with Russia began benignly enough in my front yard on an October night in 1957.  I was three years old, so it’s a bit fuzzy, but I recall sitting atop my dad’s shoulders as he asks excitedly, “Do you see it, son? Do you see it there!”  His forefinger punches skyward.  But all I see is a massive splatter of stars against inky darkness.

Fearful of disappointing Dad, I say I see “it.”

“That’s Sputnik!” he shouts. He tells me it’s a Russian satellite.

“Russia’s a huge country on the other side of the earth, and a satellite is something that goes round and round the earth.”

I have no clue what he’s talking about.  In time, though, I will learn that he could’ve more accurately said a Soviet satellite because, thirty years earlier, old Russia had morphed into the U.S.S.R. and was called Soviet Union on newscasts.  But still, pretty much everyone I knew called the Soviet people Russians, or, in their  more animated moments, Godless commie bastards.

But I wasn’t bothered.  So the Russians have shot a little star into space that goes round and round the earth. Big deal! Let ’em do whatever they like, as long as they don’t stop me from watching Captain Kangaroo.

A few years later, however, in 1962, the Russians started seriously messing with me. Nikita Khrushchev, their pudgy bald-headed boss who vaguely resembled Curly from the Three Stooges but was meaner than Moe, put missiles in Cuba and aimed them at me. (I’ve written a little bit about this HERE.) Civil Defense films at school revealed that I, along with Captain Kangaroo, Mr. Green Jeans, Bunny Rabbit and Dancing Bear, were all in mortal danger of incineration.

The so-called Cuban Missile Crisis was resolved, but my deep-seated fear of Russia had only begun. Other Russian missiles, even if farther away, were still pointed at me and my friends and remain so to this very day. 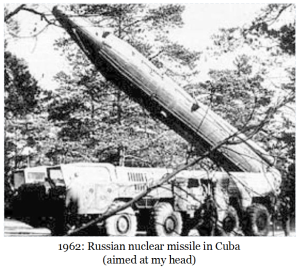 If you weren’t around for the 1960s, I get your confusion about us old farts and our Russiaphobia. Be grateful you didn’t experience the 24/7 existential terror that, at any moment, a massive solar flash would permanently switch off the lights on you and everyone you loved.  Such fear has a way of burrowing into your skull.

At some point in the 1960’s, I first suffered the nightmare that recurs even in my present old age.  A howling Civil Defense siren stirs me out of bed. I run to my parents’ bedroom but they’re not there. The siren continues. I run to wake my brother and sisters, but they’re gone, too. Frantic, I dash onto the front porch to find the sky awash in blood. The siren moans down to silence, and there’s a second or two when I hear only the wind. Then—the flash.  To this day, I wake up clutching the bed in terror.

My terror was nourished by conversations with friends and their parents, by newscasts,

even by my education. Back then, the 9th-grade history curriculum required one semester of Alabama history, and the other of Communism. This was not an objective study; this was a know-your-foe course as evidenced by the textbook’s title, Communism: America’s Mortal Enemy.  It revealed the atheism, oppression of liberty, and unabated evil that composed the cancer we called communism.  And it strongly stressed that this demon disease had been loosed by the Russians.

As I stumbled toward high school graduation there came racing from the other direction the menace of Vietnam where raged a war between Russian-backed Communists and U.S.-backed Good Guys. Older brothers of friends were drafted, armed, trained and shipped across the Pacific to protect us from Communism. Fifty thousand Americans, a few of whom I knew, died there—fighting Communism. And by 1970 I sensed I might die there too, with the fatal flash this time bursting from a Russian-made AK-47 or landmine.

Mercifully, the War in Vietnam wound down in my senior year.  But still, the fact that America had essentially lost the war made my generation’s terror and hatred of Russia all the more intense. Again, much was made of the missiles Russia continued to aim at us. The fatal flash was back—bigger and badder than ever.

In 1980 Ronald Reagan was elected president and convinced us to create a “coalition of peace through strength,” which meant that we needed to aim so damn may of our own missiles at Russia that they would come to their senses and quit this Communism nonsense.  Having been a Hollywood film star, Reagan loved movies and from them got the idea that we should put missiles in outer space aimed at the Russians.

Finally, in 1989, the iconic Berlin Wall—symbol of Communism’s stranglehold on the world—was sledge-hammered to pieces. For decades—perhaps centuries—historians will debate who deserves more credit for the fall of Communism: Reagan, with his I-got-more-bullets-than-you approach, or Gorbachev (another bald-headed Russian ) with his Frankly-I’m-just-tired-of-this-shit approach.  In any case, the Soviet Union disintegrated, melting away like Oz’s Wicked Witch.

I wept for joy because I was naïve enough to think that America’s problems were solved, that the existential threat was slain. Over the next couple of decades I studied a great about the so-called Cold War, and saw where a lot of what I had been taught about Russians was panic-born propaganda.  I met Russians, taught some Russians, shared drinks with Russians (not the ones I taught), and saw that in most respects that they’re folks like me, despite their origin.

But…the pale of Communism still hangs noxiously over Russia, especially where its leaders are concerned. And while much of my indoctrination about Communism was steeped in propaganda and hysteria, what remains indisputable is that Russian leadership is still opposed to freedom of speech and freedom of choice. President Vladimir Putin is a former KGB agent. His DNA still runs toward communism as he brashly undermines the freedoms of his Russian subjects. It is a fact that the Russian government kills journalists and others courageous enough to voice disagreement with Putin.  It is a intelligence-based fact—agreed upon by both Republicans and Democrats—that by Putin’s order, Russian operatives tried—and quite likely succeeded—in manipulating U.S. elections in 2016.

So, you ask, if Communism has fallen, why am I still afraid of Russia? Because I see the Russian government as playing the role of the bogeyman in every great scary flick I’ve ever seen.  Who remembers Glenn Close’s character in Fatal Attraction, the final scene, where you’re sure she’s dead at the bottom of the bathtub but suddenly rises up slashing with a butcher knife?

Call me crazy, but I’m convinced that in this scary flick of communism, Vladimir Putin and his cronies play Glenn Close’s character. That bogeyman ain’t dead. And he’d not think twice about taking that butcher knife to me, Captain Kangaroo, Mr. Green Jeans, and all the rest of us.

I know, cuz me and Russia, we go way back.

One response to “Me and Russia, we go way back”