Last Tuesday around 2:30 a.m., a call came into the Birmingham Fire Department that a large, vacant three-story building at 2301 Avenue J was on fire. TV cameramen arrived shortly after the firefighters and filmed thick flames shooting like cannons from the building’s third-floor.  Against the night sky, the scene was especially lurid and would have left any viewer thinking, “Geez, that place is a goner!”

But for several thousand of us, sprinkled across the city, state, and even the nation, this conflagration was particularly painful, for we are Ensley Yellow Jackets, and this building was the walls, halls, floors, stairs that enveloped us from our fourteenth through our eighteenth years. For as many generations as can be counted from 1908 to 2005, this building was “dear ol’ Ensley High, her colors black and gold.” Our alma mater.

Half a century ago, in a classroom on the backside of the building’s second floor, my Latin teacher, Miss Hortenstine, taught me that alma mater means “kind mother.” Ensley High School was indeed for so many of us a kind mother—and, when she needed to be, a stern and disciplining mother, as when Mr. Lott espied me whispering during an auditorium assembly and called me up front where the spirit of our “kind mother” urged him to whip my ass with a boat-oar paddle (a very painful lesson learned).

For more than a few of us, Ensley was a “kind grandmother,” for she had nurtured and

disciplined our parents whom we followed, by only a generation, through her doors, up her stairs, and into her classroom desks where Mom and Dad had learned math, science, history, and literature—and, in some cases (my own, for example), where Mom and Dad had started dating and had fallen in love.

For us, the kind mother’s grandkids, stories of dear ol’ Ensley High came to us well before our freshman year. During my early childhood, my parents repeatedly told tales of their Yellow Jacket days—for example, Mom’s daily fear of hearing Señorita Pace call her name in Spanish dialect, ¡Sarah, a la pizarra! [Sarah, to the chalkboard!] And so nearly twenty years later, even though I didn’t take Spanish, I would occasionally use a restroom pass to lurk outside the Spanish classroom to hear the very same Señorita say “a la pizarra!” 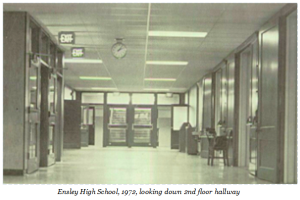 There was comfort in this generation-to-generation continuity, in knowing that you were occupying space that had been filled for decades before by families you knew and loved. I recall mornings, for example, standing in a herd outside the lunchroom, waiting for first bell to ring, when, from boredom, I would scan the memorial plaques of alumni  who had fallen in World Wars I and II, and I would recognize many of the names as being from families in my church, my neighborhood, my parents’ circle of old friends. In the late 1960s when the world outside seemed like an express train to hell—what with racial violence, assassinations, and the Damocles’ sword of Vietnam hanging over us—there was some shred of confidence in knowing that your parents, aunts, uncles, and other dear ones, had walked here before you.

So for thousands of us, those flames that leapt last Tuesday from that empty building’s roof felt like a personal assault. A friend and fellow alum wrote, “We have lost the Mother of our family that united us one.”  And I get that, because, at first, I felt that way, too. But  if you stop and think about it, you will realize that memories are amazingly fire-resistant. The tens of thousands of stories  that we in Yellow Jacket nation could tell are beyond the reach of any flames.  And so long as these memories live, so does our kind mother.

So let’s take comfort that she is alive and well, because somewhere right now, Señorita Pace is calling out “¡Sarah, a la pizarra!” and Mr. Lott is whipping my ass.