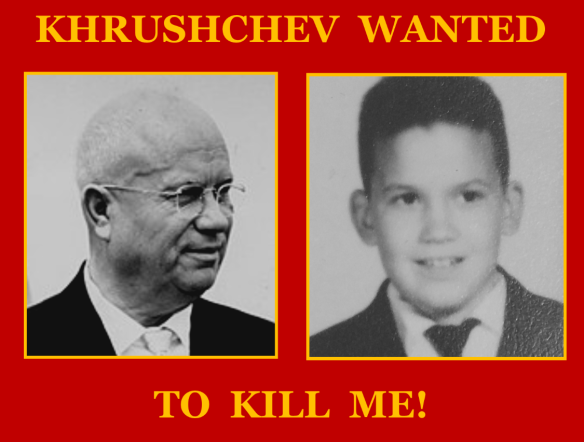 In October 1962 I was barely 8 years old and in Mrs. White’s 3rd-grade class at Birmingham’s Charles A. Brown Elementary School. Until this fateful moment, I had basked in the security that grown-ups knew best and would make sure nothing bad would ever happen to me.

But then…Soviet Premier Nakita Khrushchev planted nuclear missiles on an island a few miles from Florida and aimed them at Birmingham, at my school, AT ME!

Mrs. White told us there was nothing to worry about, fidgeting her fingers and pressing them down her skirt as she spoke.  We were led to the lunchroom to watch a film showing us how, by climbing under our desks, squatting with hand-covered head between our knees, we could easily survive a one megaton nuclear strike. (Why hadn’t the innocent people in Hiroshima and Nagasaki been told of this trick?)

We came back to the room and practiced what Mrs. White called “our drill,” each with our own desk—all very serious until Ted Flynn farted during his squat.

We learned that President Kennedy was saying every day, “Nakita Khrushchev, now you quit aiming these missiles at these children!” But the Soviet Premier would not listen. He was a bad man.

So a new drill was installed. This time we wouldn’t squat under our desks.  We would go home!  That morning Mrs. White called us one by one to the front and pinned to our garments a square piece of paper on which was written “10:00 a.m.”

Precisely at 10:00 an air-raid siren began its low moan and rose to piercing pitch. Students had been instructed to walk calmly home. Really? We—boys, especially—lived on a steady diet of World War 2 movies in which such a siren signaled exploding buildings, rivers of blood, dying gasps.

We ran, screaming like banshees. Pants and panties were pooped and peed in.

Miraculously I found my 1st-grade sister, grabbed her hand, and yanked her alongside me. We made for home like a pair of Olympic sprinters.

A few days later, Mr. Kennedy finally persuaded Mr. Khrushchev to quit trying to kill me.  An few years later, I figured out that the “Go home” drill was designed to determine which of us would be sent home to die, and which would stay with Mrs. White to die.

And not long after that, I figured out that the grownups have no clue what they’re doing.