[The fourth installment of a five-part series that begins here.] 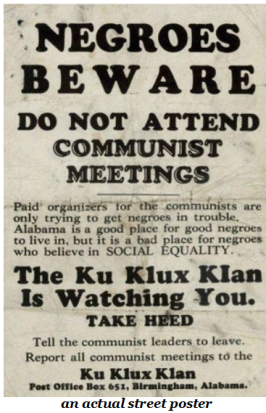 “Why did you come to our school?”  I asked my 7th-grade classmate Shirley, one of only two black students in our 800-student school. She had been writing but stopped at the sound of my voice. She didn’t look up. Long seconds passed, and I was sure she was making a show of  ignoring me.  Then…

“My old school,” suddenly she was talking! “is about four miles from our house. This school is less than a mile.”

“Did you wanna come here?”

“My parents wanted me to come here.”

She dropped her pen and turned toward me with a look that suggested I was covered in poop. “No! They’re not communists!”

“Well, then, why did they want you to come to our school?”

“It’s not y’all’s school, Gerald!” She said my name! She sort of spat it out, but she said it, nevertheless!  Until then, I’d not heard her say anyone’s name. To my amazement, this made me feel ecstatic, even honored, as if a celebrity had uttered my name!  This thrill greatly confused me.

“It’s everybody’s school,” Shirley continued. “My parents’ taxes pay for this school just like yours do.”

I had no comeback to that and figured our chat was done, until she asked what I had made on our history test. She plucked a mimeographed sheet from her binder on top of which was written in red ink “100 / A+”

Shirley smiled and returned to her writing.

That exchange broke some ice,  and not only between me and her.  It broke a bit of the ice that had frozen shut my ideas about race, about who black people were.

A couple of years later, in my first week of high school, another memorable moment would bring Shirley to mind. This was Algebra I, and the teacher was an old white man called Mr. MacArthur. The first thing he did was pick up a stick of chalk and etch a complicated problem on the blackboard.

“I want somebody to come solve this,” he said, extending the chalk toward us. In retrospect, I think his plan was to impress upon us our ignorance, our inability to solve hard problems, and then, perhaps, to announce that when he was done with us, we would be smarter.  But his plan was immediately derailed.

Seated in front of me was a black student named Derrol, who raised his hand, tentatively.

“Oh, you think you can do it?” Mr. Mac smiled condescendingly.

“Yessir, I think so,” said Derrol.

Mr. Mac beckoned Derrol forward and handed him the chalk. Derrol proceeded to solve the equation step-by-step-by-step without pause.

He looked plaintively at Mr. Mac who looked frowningly back at Derrol.  Mr. Mac stepped slowly toward the blackboard, read through the problem, scratched his head, and muttered, “Well…uh, yeah, that’s right.”  Derrol showed no sign of superiority or haughtiness, he just humbly handed back the chalk and returned to his seat.

He would prove to be way, waaaay smarter than anyone else in the room, maybe even in the school. (Four years later Derrol would be studying at Northwestern University on full scholarship, after which he would attain a medical doctorate in pediatrics.)

Now here I must confess something of which I am deeply ashamed. Like all racists, I had built my worldview with the straw-bales of stereotypes. Among the white grownups I knew and respected, the general consensus was that “colored folks” were mostly alike—not as bright as us, not as good as us, but useful for subservient jobs (e.g. yard workers, house cleaners (maids), farmhands, cooks, janitors, etc.) or, occasionally, as athletes or jazz or soul musicians, dancers and singers.  This is what I was taught, this was my indoctrination.

Increasingly, however, my experiences, my observations did not jibe with my indoctrination.  Looking around me, I saw smarter-than-me black students. Moreover, there was the matter of my black teachers, many of whom I still carry lovingly and respectfully in my heart to this day. I’ve already written (here) about Mrs. Todd, to whom I must add Mrs. Hanks, Mrs. Lassiter, Mr. White, and Mrs. Brown, my biology teacher who, with twinkling eyes, referred to her students as organisms:  “I see organisms in the back,” she would say, “who must either cease talking or get 20 demerits.” (I was one of ‘em.) These were professionals who ably and passionately taught me, and, more importantly, opened my mind to the world around me.

And so, for the first time in my life, I began to seriously doubt that the grownups who had raised me knew what they were talking about. I had given them a pass on Santa Claus and the Easter Bunny. But now I began to suspect I had been Santa-Claus-ed and Easter Bunny-ed about a whole lot more.

So I began to ask pointed questions, which led the grownups to label me with one of their most disparaging terms—liberal.

[to be concluded tomorrow]