[The second installment of a five-part series that begins here.] 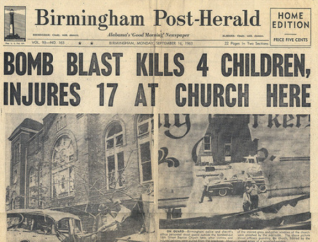 The church my family attended had sought long and hard to find a minister who would state openly that he was in favor of segregation.  And find him they did.

Racism imbued our church as it did almost all white congregations in the South, and the civil rights movement and the crises it (rightly) forced, made “integration” (as we then called desegregation) the topic of conversation in every place.

It became the subject of  my Sunday School lessons. (Mind you, I was in the third grade.) My teacher, the minister’s wife—a short, round, and, in my eyes then, most lovable lady—taught us: “We must pray for and forgive the Negroes, for they know not what they do.  Bless their hearts.”  All the trouble, she said, was caused by Yankee communist outsiders.  So we prayed for our local Negroes, that they would not listen to evil and go back to being the good Negroes God desired them to be.

After Sunday School was worship, and on the third Sunday of September, 1963, worship was cut short.  Outside the church men clustered round cars whose radios blared deep, somber male voices—and talk of a bomb.

Suddenly the minister and others began to shout, “Everybody! Get in your cars and go home and lock your doors!” My dad stuffed us into our car and drove faster than usual. On the way, it befell my mom to explain what was happening: A bomb had gone off at a black church downtown. Some people were hurt.

“Who would bomb a church?” asked one of us kids. Mom didn’t know. Dad didn’t say.  We just had to get home quickly because there could be more violence.  (And there was.)

Sometime that afternoon, word came that the bomb had killed four children—girls—and had injured more than a dozen.  I was too young to wrap my head completely around what had happened. But I remember several times shuddering in sorrow and horror. Those four young girls who died couldn’t have been Yankee communist agitators. They were just children, like me. Why them?

But I remember this, too: The “black community” was still held responsible.  We learned from grownups in school and church that none of this would have happened and those four little girls would still be alive if local Negroes hadn’t invited communists like Martin Luther King to town to stir up that church, thereby provoking bad men to bomb it.

Here’s what I wish I could tell you: that I called bullshit on that explanation.  But, instead, I tried to embrace it because, again, it came from the mouths of those whom I’d been raised to trust.  I actually yearned to believe it: All of the evil was being caused by “outside agitators” who had come to Birmingham to stir up our Negroes. We white folk were in no way responsible.

I tried hard as I could to believe it, but some feint notion beyond my mind’s reach, something I could sense vaguely but couldn’t name, poisoned my ability to fully believe what I was being told.

And that something drew a little closer a few years later when the first-ever black girl enrolled in my school and sat in a desk only a few feet from my own.

[to be continued tomorrow]